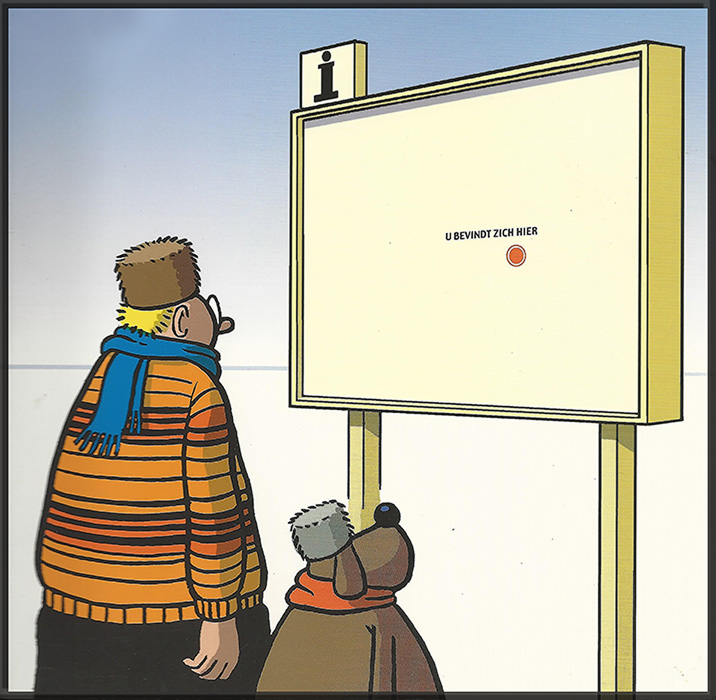 A great way to start our climb

About two years ago, I was on my way to deliver a training in Friesland, in the north of Holland. I had great directions as well as a navigation system. At that time there also was a festival for the villages around the place where I was expected for the training. I kept driving and hitting blocked streets. I did not seem to get any closer, though I delivered my km's.

I had a comic book of the Dutch cartoonist Mark Retera among the paraphernalia I was going to use during the training. The front page was the image above. After hitting the umpteenth barred street, I was getting low in time. Fortunately there were two traffic regulators at the barrage and I asked them how I could reach my destination. At first they were not so sure how. I walked back to my car and got the comic book out of the back of my car and showed them the image. "I feel like these two", I told them. They had a good laugh and really took the effort to explain to me properly how I would get 'there'.

Everything needs a context

A red dot in a white field is as much help as a blindfold in the dark. I am more and more seeing and understanding that the real importance lies in the relations between things. Imagine I asked you to play a 'good' note for me. To this silly request you could either play any note or none at all. A single musical note is neither good nor bad. It is in the relations to the surrounding notes. We can only judge a note by its context.

So the context is more abstract than the thing itself, it's on a higher locigal- or abstract level. But how high up?